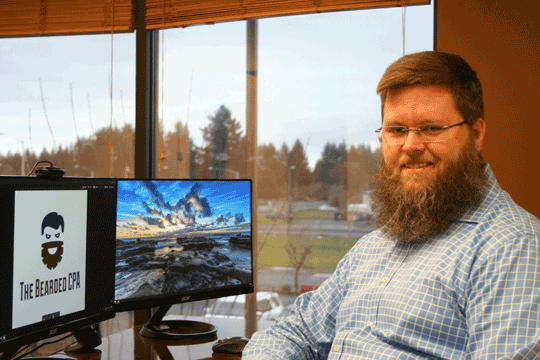 The tax man cometh, but he will be three days late this year, since federal taxes are not due until April 18. Those three days may be a boon to busy CPAs in the region.

“Unlike the rest of the country, our returns are coming in faster than last year by 20 percent,” said Jim Holder, managing member at Ridgefield-based Northwest CPA Solutions LLC.

Roy Martin, founder of The Bearded CPA in east Vancouver, said his firm’s returns are coming in fast and furious as well, in contrast to IRS reports (as of March 10) that individual income tax returns received were down 6.8 percent; e-filing receipts were down 8.2 percent for tax professionals and 4.7 percent for self-preparers.

Martin speculated that in some areas of the country the slowdown could be a result of more stringent fraud protection processes and increased documentation requirements for Earned Income Tax Credit and Additional Child Tax Credit.

But here, said Aaron Dawson, president of CPA firm Opsahl Dawson, which has offices in both Vancouver and Longview, the booming economy is keeping local CPAs busy. Sales tax deductions are way up, and “sellers who have been waiting on the sidelines for demand to rise are now actively marketing their properties to eager buyers.” Of course, those transactions generate income, which must be reported on the correct form.

Martin said that many business owners are optimistic about the economy; he’s been getting a lot of questions about what President Trump is going to do regarding taxes.

“If he does what he says, it will be great for everybody,” said Martin.

Dawson said that with the economy on the rise, many new businesses are starting up and the region’s population is growing – as a result, more people are looking for a CPA. The choices, however, are narrowing, as the local CPA industry consolidates due to baby boomer CPAs slowing down or retiring. Opsahl Dawson purchased Marshall H. Waldman’s practice last year, and has bought out a couple more this year.

“We’re excited about the growth opportunities,” said Dawson, whose firm currently employs 37 people. “We’ve spent a lot of effort on infrastructure, technology, procedures and a new building. We’re ready to handle the growth.”

Martin, who opened his business in 2014, employs one seasonal and one part-time employee besides himself. But the business is growing – he expects to have a full-time employee on board by end of the year.

Other trends Dawson identified that are creating additional work for CPAs include an increase in estate planning activities and more complicated tax returns due to publically traded partnerships (PTPs).

“With an aging population of baby boomers, we are seeing more inheritance of assets due to the passing of older parents,” said Dawson. “Identifying fair market value for the step up in basis at the date of death has been a new concept for many of our taxpayers who are beneficiaries.”

He added that many clients are surprised at the amount of work and lengthy process it takes to distribute and close an estate. Tasks include locating the will, obtaining an IRS EIN number for the estate, opening a bank account, identifying all estate assets and ensuring property is titled, then finally distributing assets. This process takes a year on average, he said, and most first-time personal representatives are not prepared for this often grueling process.

PTPs have become a popular “alternative investment” because they can yield impressive returns, but Dawson cautioned that it is challenging to report the proper basis to determine the gain or loss when a PTP is sold. He said the complexities can add significant complications and costs to your tax filings (which should be considered an investment cost), and many clients get frustrated by filing delays caused by late K-1 arrivals.

“We had one client who had 40 separate PTPs and sold 10,” said Dawson. “It more than quadrupled his tax return costs.”

These sorts of complexities are why Dawson puts a premium on accuracy. Getting it right, he said, “is the most important thing” and saves you money in the long run, because inaccuracies can lead to audits, which are “really expensive.”

“You do not want to trigger any attention from the IRS,” said Dawson, adding with a smile that he likes to “make tax returns look boring.”

Dawson’s advice seems timely: Holder recently spent a week taking continuing professional education courses, and stated that “one of the classes that made the biggest impression on me was ‘IRS Audits, Appeals, & Collections: Successful Strategies.’ They are predicting that certain audits will go up by 40 percent this year!”

As CPAs like Dawson, Martin and Holder focus on attention to detail, their clients should exercise caution to avoid one of the most troublesome aspects of income tax filing – identity theft. The IRS identified and confirmed 31,578 fraudulent tax returns involving identity theft as of February 29, 2016. But the IRS has also increased its ID theft filters from 11 in 2012 to 183 filters in 2016 – enabling them to stop nearly 1 million fraudulent refunds from being issued last year.

“Identity theft continues to be an issue,” Dawson said. “Fraudsters are attempting to file false tax returns and receive the refunds ahead of the taxpayers. The IRS has taken a more proactive approach at identifying taxpayers who are at risk and are asking for more information like driver’s license numbers before the return is filed.”

The most recent edition of Holder’s newsletter listed ID theft as the top threat in the IRS’ “Dirty Dozen” list of common scams taxpayers may encounter in the coming months. Other common scams to watch out for, said Holder’s article, include aggressive and threatening phone calls by criminals impersonating IRS agents, phishing schemes and malware that try to steal personal information, scam artists posing as tax preparers and fake charities.

One way CPAs are dealing with burgeoning business, more complicated returns, and an increased emphasis on security is by turning to technology.

“Electronic signature software makes it easier for clients to sign returns on the go,” said Dawson. “Convenience is a big improvement we are adding to the process.”

Martin added that many of his clients don’t ever come into his office.

“It’s great,” said Martin. “I have clients in 28 different states, two in the UK and one in Australia. I can serve clients wherever they are, even if they move away.”