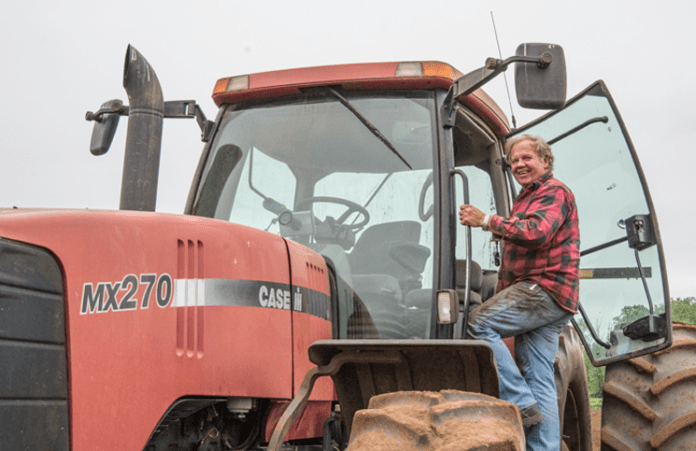 In search of a cucumber, a few tomatoes or some berries, most people head to the local supermarket. Or, perhaps the nearest farmers’ market. But there is yet another option: u-pick farms.

According to Joe Beaudoin, who owns Joe’s Place Farms on NE 112th Avenue, u-pick has changed dramatically in the last 35 years. Originally, Beaudoin said, u-pickers were gleaners, entering the fields only after the farmer had harvested what he wanted. Now, he said, pickers have access to prime fields.

Also, Beaudoin said, people don’t buy in quantity any more. In the mid-70s, he often sold pears by the bin, each weighing 1,200 pounds – sometimes as many as 22 bins per year. Today, he said, his customer base is up 100x and the county population has doubled, but he might sell only two bins of pears.

“The business has totally changed,” said Beaudoin. “They want to buy something they can pick up and put in their mouth or the microwave.”

Beaudoin categorizes u-pickers into three types. The first are the serious pickers – often from eastern bloc nations – who want enough produce for canning and preserving. Then there are folks who just want to pick a dozen tomatoes for tonight’s spaghetti sauce or a few strawberries for shortcake after supper. And third are mothers who bring their kids to the farm for a fun day.

Different u-pick farms target different customers. Joe’s Place prefers to cater to the “serious pickers” and therefore opens their fields only from 8 a.m. to noon, no matter what the crop is. In contrast, Majestic Farms Blueberries in Hockinson (owned by Shelley and Glenn Deal), keep their fields open all day but are closed on Mondays and Tuesdays.

The Deals began their blueberry operation in 1995. Dealing with the local commercial buyer was not financially rewarding, said Shelley Deal, so about five years ago they switched gears.

“We were very nervous about putting the whole field to u-pick,” said Deal, “but it’s the best decision we ever made. We have no trouble u-picking 10 acres of blueberries.”

Variety is the spice of life

Few farms in the area rely solely on u-pick for their revenue stream, and many farms offer a wide variety of crops. Joe’s Place, for example, has a large store onsite, and farms about 80 to 90 acres in the city limits, on which they grow fruit trees, berry crops, vegetables and Christmas trees (firewood and mulch are two byproducts, as well). U-pick is limited to strawberries, raspberries, marionberries, plums, apples, peaches, eggplants, peppers and tomatoes. Beaudoin said that u-pick accounts for about 20 percent of Joe’s Place’s revenue.

“U-pick is important to our operation because it enables us to grow a larger selection and amount of product,” said Beaudoin. “Without u-pick, we’d have trouble to keep up with the amount of produce.”

The Boldts started growing vegetables after they sold their dairy herd in 2006. Starting small, with just four acres in production, they have now expanded to 12 acres, with an onsite store. In addition to the vegetables, they also sell about 1,000 flowering hanging baskets and vegetable and flower starts. Customers are also attracted by a petting zoo, the opportunity to see young calves from the Boldt’s beef herd, and the chance to observe a functioning dairy (the Boldts lease their dairy facilities to another dairy owner). But for Velvet Acres, u-pick is the apple of their eye.

“It’s the largest money-maker of the whole business,” said Helen. “U-pick accounts for about 40 percent of our business.”

While Majestic Farms focuses mainly on blueberries, the Deals also own a commercial landscape company that they started in 1979 (GW Deal Inc.) and grow their own nursery stock – in fact, acquiring more room for nursery plants is why they bought the blueberry farm in the first place.

While farmers are known for their optimism, some concerns loom on the horizon for local u-pick farm owners.

Boldt cited having to teach pickers how to treat the plants well as a major challenge, while high insurance costs and “unruly pickers” have caused several farms to cancel u-pick operations, according to Rose Smith, co-owner of the oldest farm in Clark County – Historic Stratton Farm in LaCenter.

“People wouldn’t stay in their row, or wanted to pick at 3 in the morning,” said Smith. “Families wouldn’t watch their kids and we turned into a babysitting service.”

While Deal said that there’s always a handful of people who won’t stay in their assigned row, the great majority of pickers “are wonderful.”

Beaudoin is discouraged by the increase in theft and vandalism. For example, in recent years, he has experienced vandalized and stolen equipment, litter and old tires thrown into his orchards and graffiti on buildings and fences. He said people even sometimes steal fruit tree starts and plants right out of the row.

He is also concerned about the pending widening of 18th Street. He has a half-mile of u-pick fields on 18th, and is losing quite a bit of acreage to the project, which includes an 8-foot-wide hiking trail, a sidewalk and two bike lanes.

“No one is going to able to enter our fields from 18th Street,” Beaudoin stated. “It is going to be difficult to get people into the fields. We’re taking out an apple and peach orchard to accommodate parking, but we’re still trying to figure it all out.”

Boldt said that it is important to keep agriculture as a viable product in Clark County.
“We need support from other people to help promote that,” she said.

To help educate kids – and their parents – about the importance of agriculture, the farm hosts a “story time” where they read a book about farming, give a tour of the farm and teach farming-related craft projects.

“We need to educate people about the agriculture industry so it doesn’t fade from peoples’ consciousness,” Boldt said.

If u-pick sounds interesting, find your sunhat soon. Deal said that due to warmer weather this spring, crops may be ready before the standard July 1 date.